JOHN JACOB NILES and GO AWAY FROM MY WINDOW

In many ways the songs on PAST LOVES are no more than remembered remnants from a past life And, with GO AWAY FROM MY WINDOW, it is difficult to know if I ever knew more than the two verses I sing on the album

However, in preparing the track for release it became necessary to locate the composers of the songs and that task brought me to the door of John Jacob Niles

It can be heard on the link at https://www.youtube.com/watch?v=9dGw8sNfzgE&index=3&list=PLHB5Tf-n-rSNNtLX79PZTa_U5_j0s9xoJ 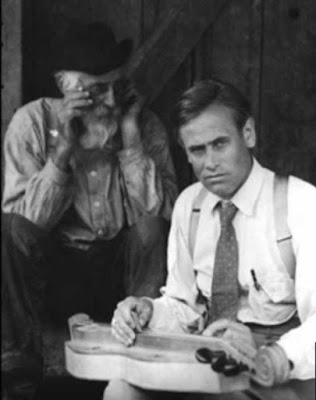 Composer, collector, and balladeer John Jacob Niles, was born in .
came from a musical family. His great-grandfather was a composer, organist, and cello manufacturer; his mother, Lula Sarah Niles, taught him music theory. In 1904, 's family moved to a farm in rural where John Jacob began collecting folk music. By 1907, Niles composed his first song, "Go 'Way from My Window," based on a line of song collected from an African American farm worker.

"In 1908 my father had in his employ a Negro ditch-digger known as Objerall Jacket. As he dug, he sang, "Go way from my window, go way from my door" -- just those words, over and over again, on two notes. Working beside Jacket all day (I was sixteen at the time), I decided that something had to be done. The results were a four-verse song dedicated to a blue-eyes, blond girl, who didn't think much of my efforts. The song lay fallow from 1908 to 1929, when I arranged it and transposed to a higher key. "Go 'way from My Window" was first sung successfully in , in 1930. It has gone a long way since.

The lyrics for the song are on the next post and the link is
http://sosaidthesap.blogspot.co.uk/2017/02/jjniles-lyrics-for-go-way.html