A WEE PUSH AND A GOOD DUDE

And here is Trevor at his radio desk

And here are some quotes from his emails to me

'It's always exciting to meet a "real" musician who writes with integrity and no apparent gimmick to sell, just real creativity, emitting naturally, like expelled breath'

'I shall play three of your tracks as featured artiste across the two hour show. I seem to be enjoying good listener numbers so you will certainly reach people who, like me, have not encountered your songs before. That can only be a good thing...'

There were other pleasing comments which I am unable to keep to myself and here's three of them 'You are an interesting enigma!' 'Your talent and style is quite unique and very interesting' and 'I'll be playing your tracks on my show again that's for definite'

Which leads me to the title of this post: I came across the word dude in relation to the term 'a silly goat' (see the previous post) and I have grown very fond of it Needless to say, since coming across Trevor, I have also been growing fond of him and hope this and my thanks to him are being conveyed in these comments
Posted by SKC at 07:52

THE UNKNOWABLE NEXT IS NEXT

And in amongst the text which is being used on the cover is a caution: I like cautions Indeed I wish i had had more of them - and been willing to pay attention to more of them The one for the album says - and I quote

'if you are one of the lucky ones for whom love worked out well the words on this double album may not be for you'
Posted by SKC at 06:27

FROM SAP TO SILLY GOAT

From Sap to Silly Goat and then who knows

But here's a little goat* from a painting I made after a dream in which I had met him - or it may have been a her- on a road somewhere It's difficult to tell the difference in a picture like this, or in a dream
Anyway as I later realised the goat was most likely an aspect of myself 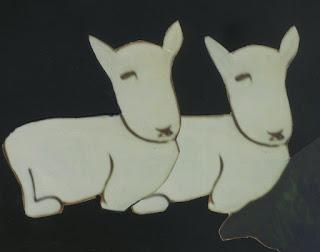 The image of the it, he or she goat will be making a formal appearance in my next project The decision led me to find out more about the expression 'a silly goat' (I have a memory of hearing it applied to someone I knew - perhaps I was the recipient) But if I were - and might well be again - I found comfort in the following words from the Urban dictionary

The cutest thing you've ever seen Usually referring to a significant other. Usually solicits many "awwws" from others because it is so darn cute

Dude you must really love your girlfriend yeah, she's my silly goat, my everything.

PPS Then I changed the image again after some more thinking 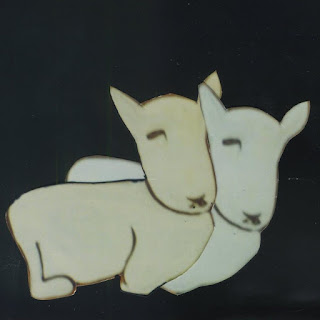 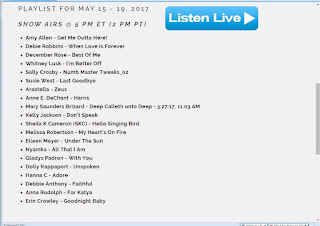 EMERGING ON COAST TO COAST

I can also admit to getting a bump from seeing Where the Pebbles Grind and Scrape under the heading Bumper Music It is all a bit much to accommodate on an otherwise ordinary day in Glasgow Also, how I came to be getting aired on this station was not engineered, as far as I know, by me 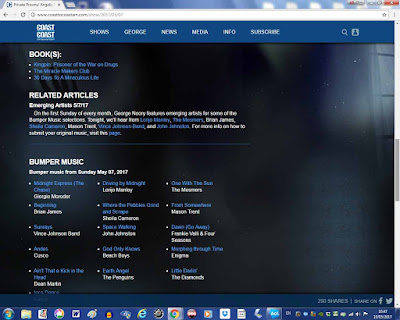 The description which follows was taken from their site at http://www.coasttocoastam.com

Coast to Coast AM airs on more than 600 stations in the , as well as , and , and is heard by nearly three million weekly listeners. With hosts George Noory, George Knapp (weekend), and guest weekend hosts, it is the most listened to overnight radio program in .

PS The song is the second track on the album MORE LIKE A RIVER THAN A ROAD and it can heard on Bandcamp at https://sheilakcameron.bandcamp.com/album/more-like-a-river-than-a-road
Posted by SKC at 03:14