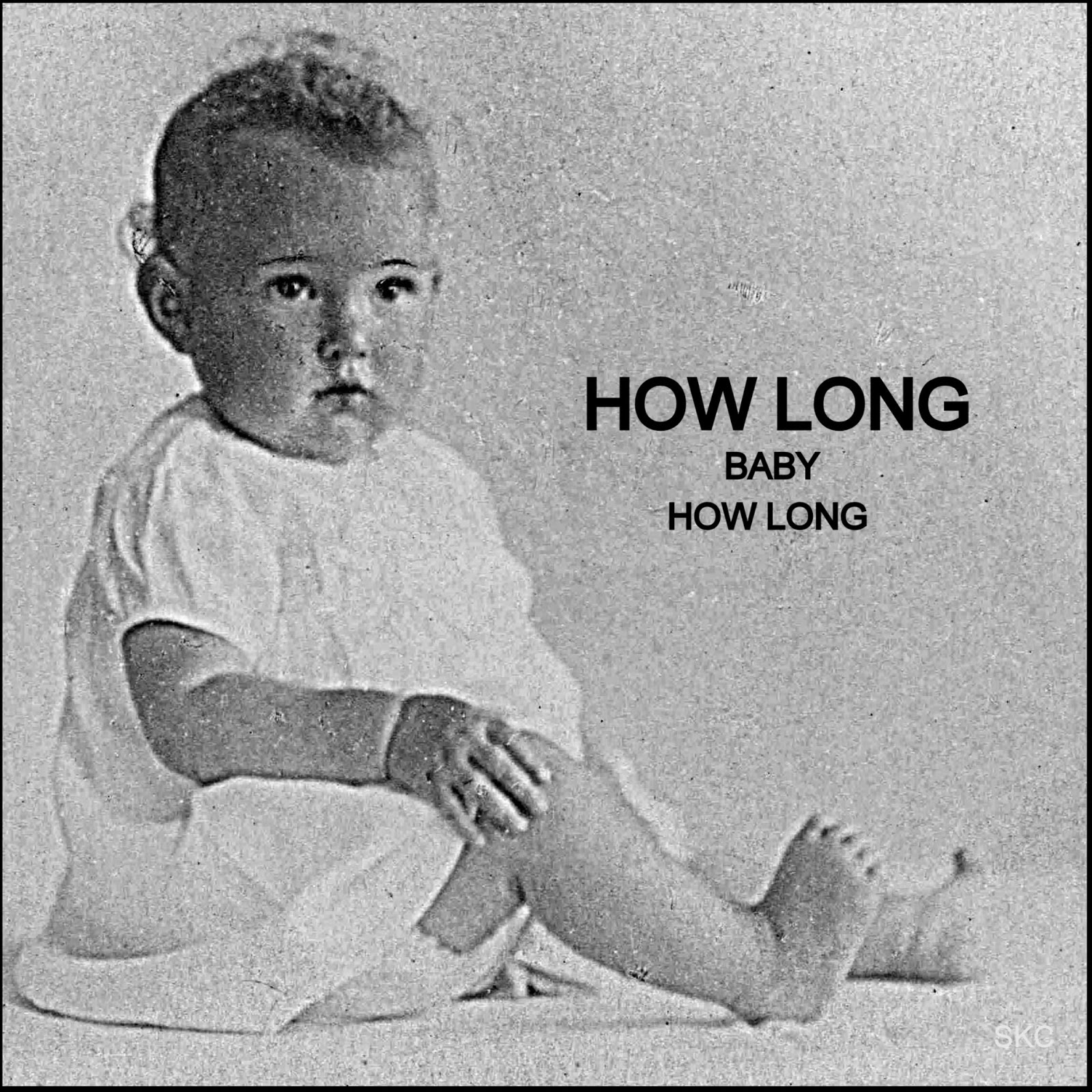 NOT MY LOVE - BUT A MAN I LOVED

In the post entitled Somewhere Somehow (see the link below) I refer to a song I had recently come across and recorded. And I was impatiently hoping it might receive some treatment to make it more more suitable for Bandcamp.

This morning for two reasons, I decided not to wait any longer. My patience had run out and friends, who knew well the man referred to in the title of this post, thought he might have been glad to have his photograph alongside the recording.

He, and other past loves, were certainly in my mind as I tried to record it.

The song is LOWLANDS AWAY. Untreated it is now on Bandcamp at https://sheilakcameron.bandcamp.com/track/lowlands-away
If it does get mastered it will be replaced by the new and improved version. 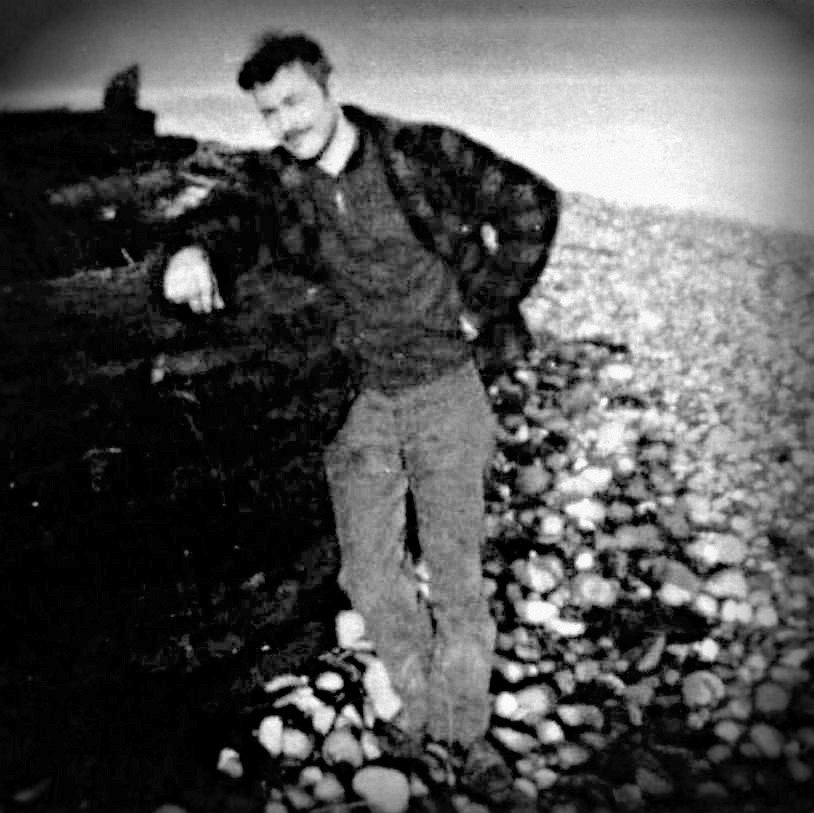 P.S. In the Bandcamp comments about the track I have written 'With regrets but no apologies for the stumbling performance which goes well with how I manage the rest of my life'
Posted by SKC at 01:59

The selection for the CD is now complete and there will be no more changes to it - or to the title.

I will require an image if I decide to upload the songs to Bandcamp and at present I have no idea what I might use. But having said that I am immediately contemplating using a photograph of me looking into the sun and one in which I look exactly as I did on the day it was taken. And the songs can be heard as they did on the day they were recorded.

However, the tracks have been mastered - with some necessary de-essing - so I may try to soften up the photograph a bit - although if I am continuing to be under the influence of Neil I should not be hesitating about this. The image would also be in line with a line from one of the songs on the CD 'Taking it down to where I don't count.'

The photograph below then is of Neil up front and very real. Mine is alongside
and underneath them both I will put a link to Bandcamp if I decide to upload the songs to that site. 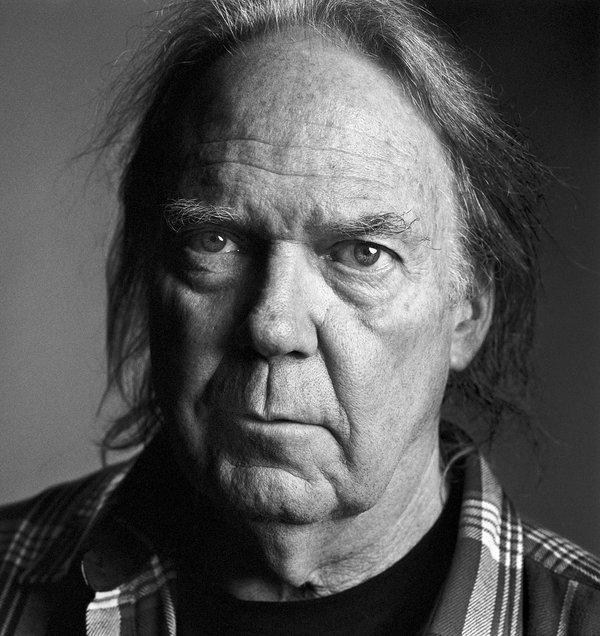 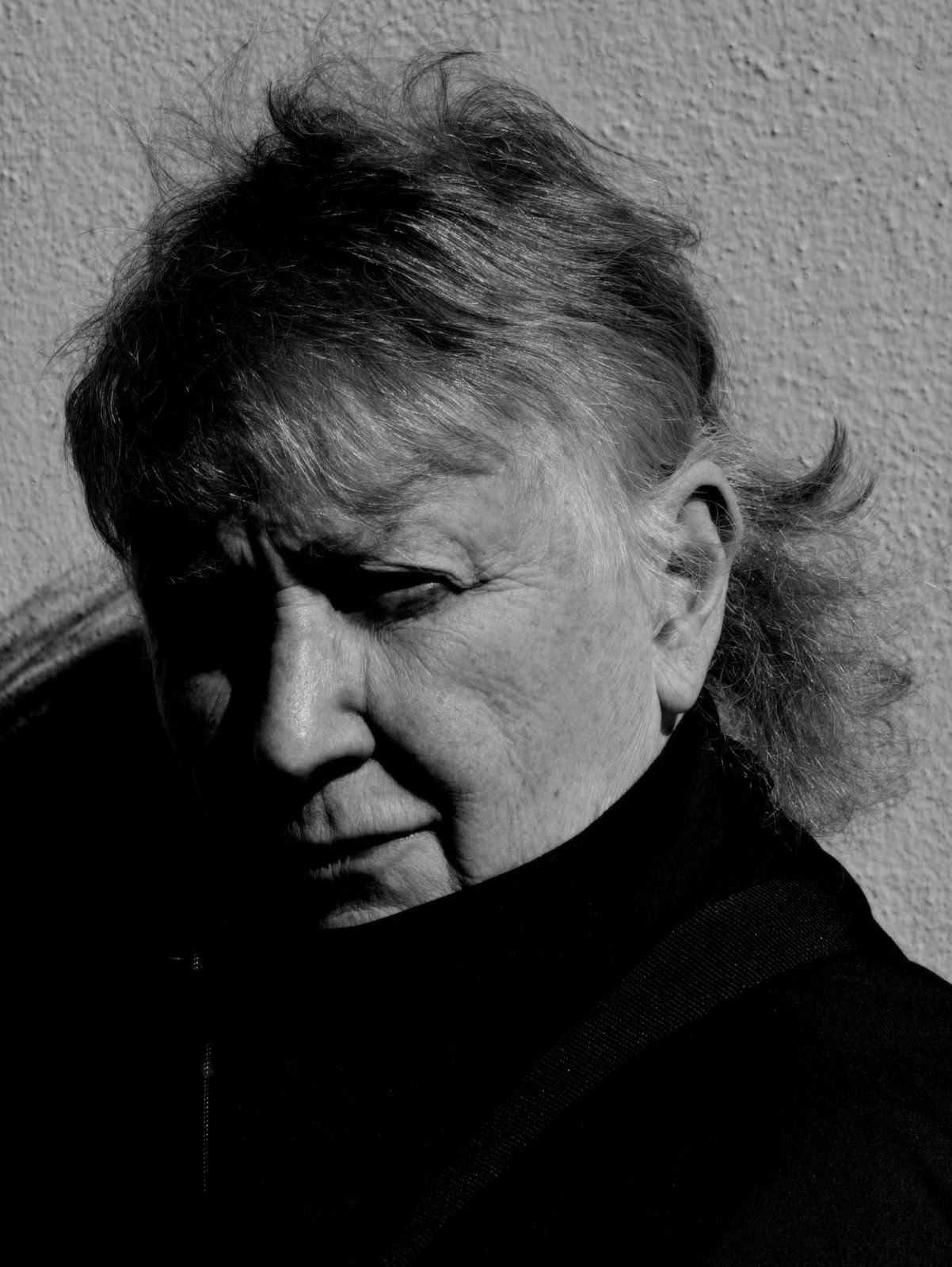 BENEATH THE APPLE TREE

There was a previous post about the apple tree song. This has now been deleted but the comments from it are repeated below.

Some new lyrics have acquired a tune and have become a sort of spoken word and hum along song. It is now in need of some additional sounds. And I am on the hunt for them. Meanwhile, as they may never arrive I am putting the song out there on Bandcamp. I could of course wait but while I am continuing to enjoy the song the option of being patient has no appeal.

I was not sure until today where the song was heading but I now feel it is at least on its way somewhere.

And as I do not have an image to go with it I am using a rough version of an old one. Here it is. And I have been told the apple looks more like a deflated balloon. How appropriate is that.

What follows is an update

Some additional sounds were added to the song but they did not work out as had been hoped for. For me they interfered with the simplicity of the track. But the song was mastered and this revised version has replaced the old one on Bandcamp. And who knows there may be another mix - and a better one - further down the line 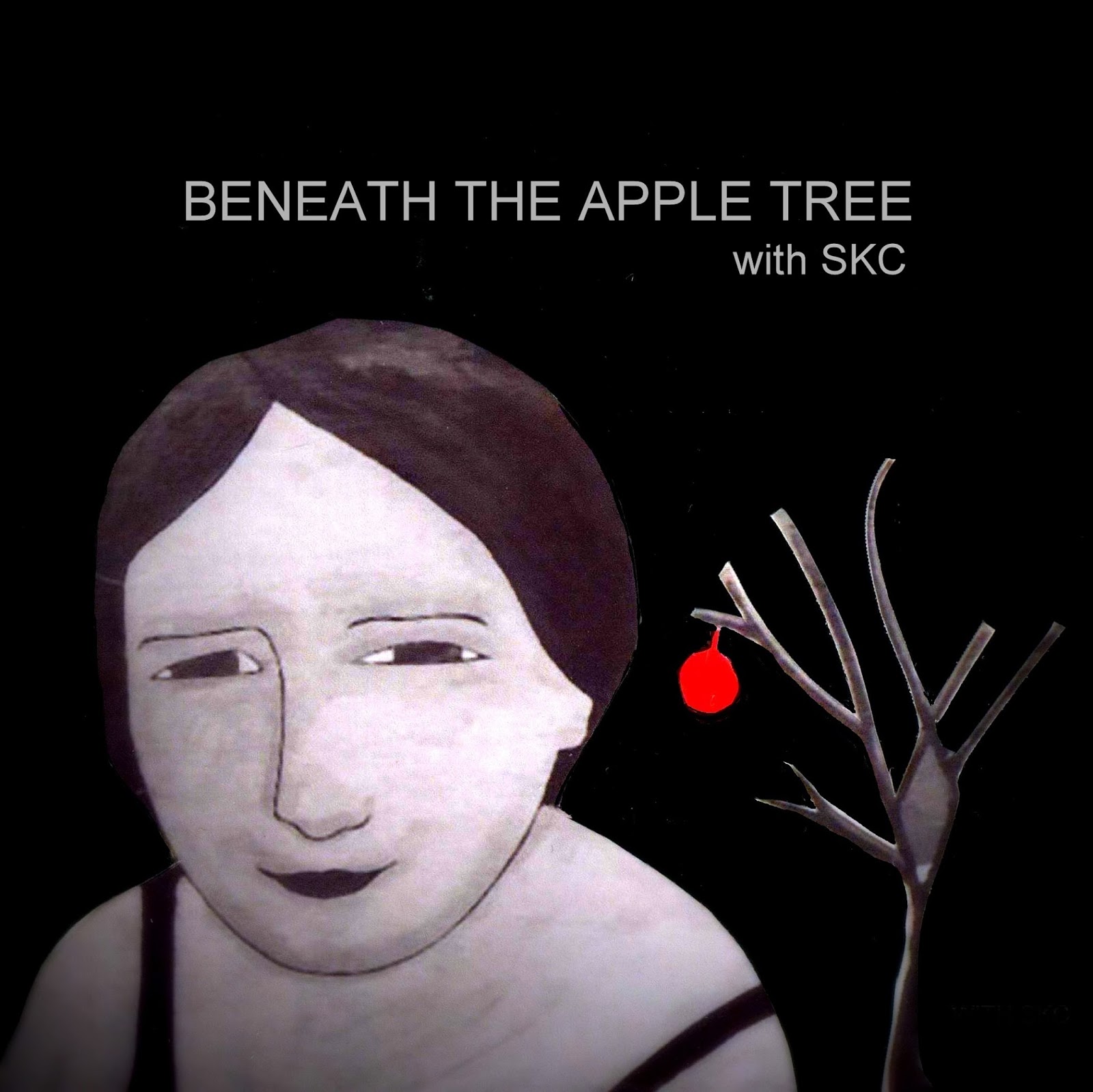 The mastered version of the words can be heard on Bandcamp at https://sheilakcameron.bandcamp.com/track/beneath-the-apple-tree
The lyrics are also there and on the blog at http://lyricsallsorts.blogspot.co.uk/

It was a long time ago that the first of my songs were professionally mastered. There were four of them in the group I sent in to a local studio. Since then other versions of the songs have been included in other selections.

I was reminded of their existence this morning when searching for a song called THIS IS NO WAY TO SPEND AN EVENING. I found a version of it in a small selection which has always been referred to as FOUR SONGS. I decided to put this on Bandcamp with the tracks sounding just as they did when I received them from the Cava Studios in Glasgow.

The image I am using is from a painting called Empty Chair. It fits with the song No Way to Spend an Evening - but not with the others. The Bandcamp site requires it to be cropped but here I can use full copy of the original. It was also a long time ago that the painting had been photographed. I rescanned it this morning hoping to improve the quality. 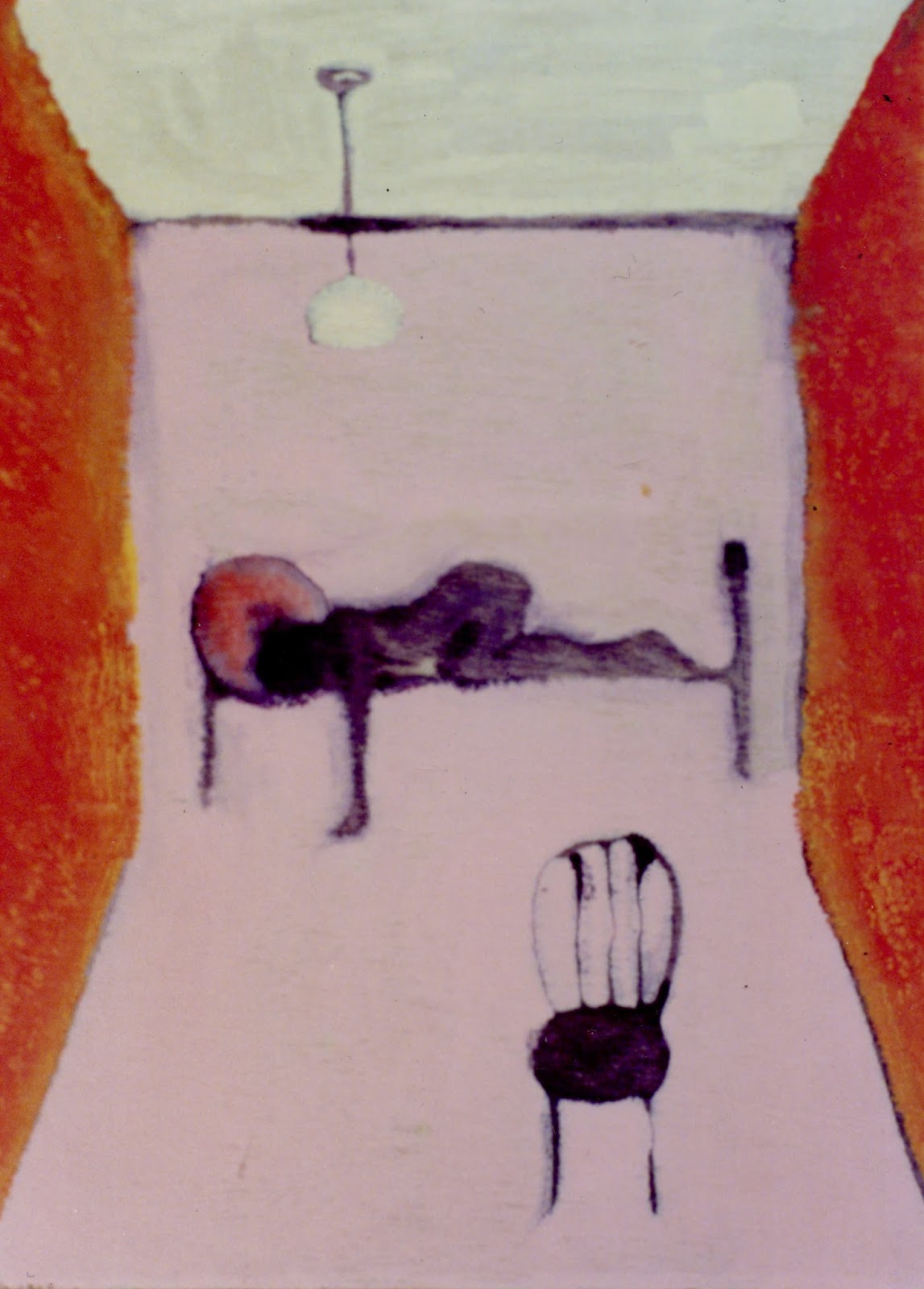 The four songs are no longer on Bandcamp

The selection of tracks referred to previously on this blog as THE 35 has now been mastered and decisions have been made about what should remain on it and what to do with it.

One particularly awful song has been removed as it sounded like an advert for shampoo. One song was deleted early on (as mentioned elsewhere) quite simply because it was a 'doubler'.

There are others which should probably get the chop but in some ways this would defeat the purpose of letting them be seen for what they are. I think that the selection could be accurately described as a sample of attempts at song writing.

A few of the songs have appeared in other selections but most are not in that category. Several have been considered as candidates for working on as singles but leaving them in THE 35 does not preclude them from this happening in future.

I suppose it could have been made into a more interesting selection had I chosen to reorder the songs but to be honest I couldn't be bothered. There would have been so many possible variations. So, they are in the same haphazard order in which they were submitted to the studio. And it has to be said that the opening track entitled MOVING WITH MY EYES ABOVE (whatever that was supposed to mean at the time of writing it in Alberta long ago) features intrusive foot thumping throughout and is interrupted by the sound of what might be breaking glass.

As for who might be bothered listening to the entire selection my expectations are low. But as with most of what I do, somewhere along the track I felt I wanted to do this and now its done. And there is some satisfaction in that.

A copy of the CD (retaining the title of THE 35  - although it will consist of only 33 tracks) will probably appear on Bandcamp sometime soon.

THE TWINS and the CAMEL

These words could be a lyric or they could be just words in short lines in little groups. I wrote them yesterday and if I do not put them somewhere they are likely to get lost amongst all the other words which have no where particular to go.

I am thinking I should give up on all this writing and working on songs until all that I have made so far have been tended to. They should be put into a book or onto a CD or put into a bin. And then perhaps I could begin again with a cleaner slate.

Meanwhile the words with the title The Twins and the Camel can be found at http://lyricsallsorts.blogspot.co.uk/
Posted by SKC at 02:09

I was looking for an old written out lyric of the folk song THE WATER IS DEEP (sometimes called The Water is Wide) when I came upon the SOMEWHERE SOMEHOW song. And I continue to wait impatiently for the backing which might or might not arrive.

In the meantime, as I attempted to deal with the impatience I decided to record THE WATER IS DEEP. Keeping to my approach of taking the rough with the smooth this recording leans heavily towards the rough stuff.

Also my recently refurbished aspiration is to be alert to inadvertent delights and it would be splendid if this recording provided one for some stranger or someone who likes to sing along to a good tune.

The image I am using here and on Bandcamp is cropped from a photograph taken from the ferry which crosses from Alliford Bay to Skidegate Landing on Haida Gwaii. 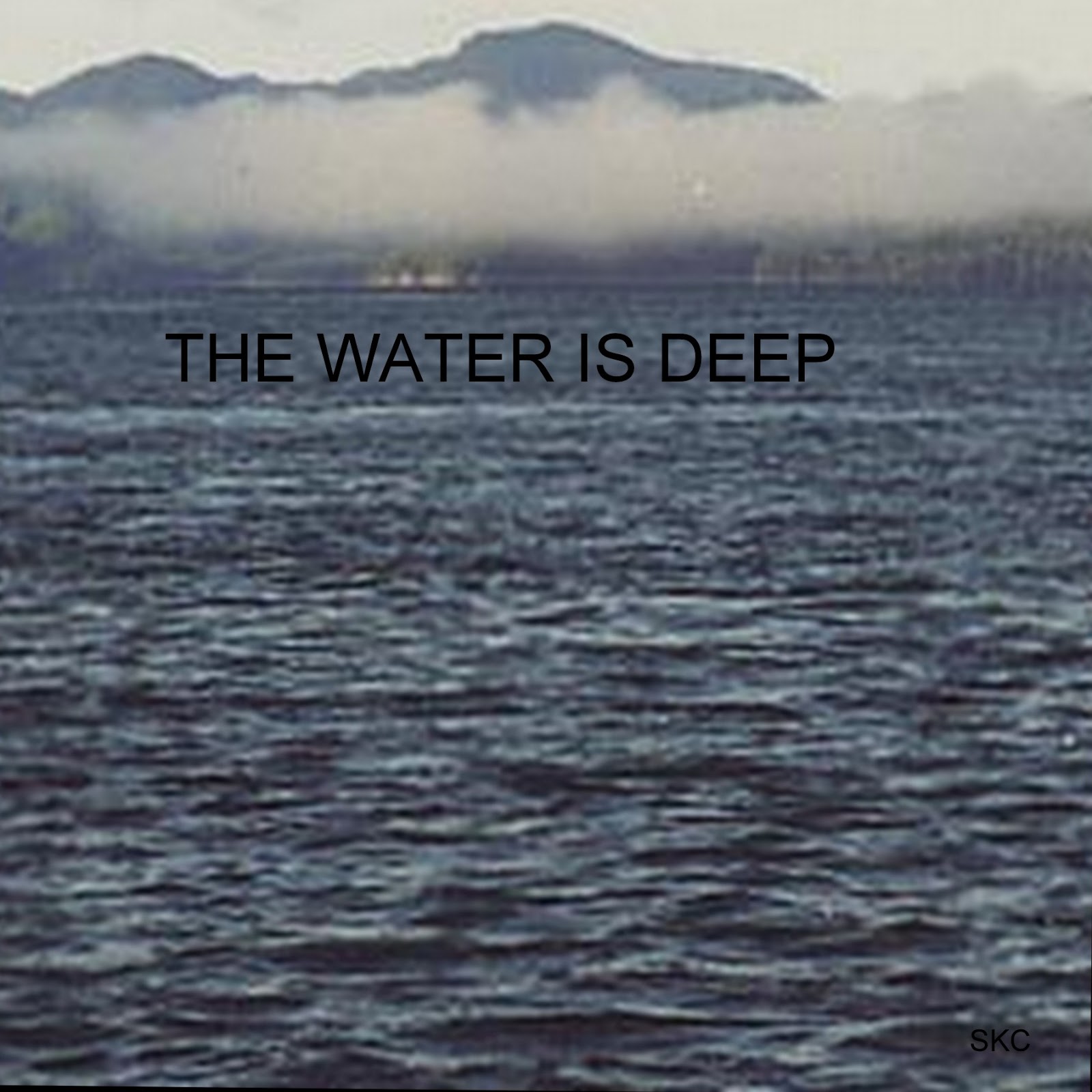 The link to the song on Bandcamp is https://sheilakcameron.bandcamp.com/track/the-water-is-deep
Posted by SKC at 07:26

I recently and unexpectedly came upon another of the songs I used to sing. I was looking for a different 'past love' and there it was.  I had completely forgotten about it. It is a shanty and I think it is lovely. And, as with The First Time Ever I Saw Your Face, I have tried to record it.

I did lots of takes but have now settled on one of them. There are several quakey bits and I could keep trying to get a better version. My guitar playing would certainly benefit - but I have decided to move on -  perhaps to the song I was initially looking for.

As to what will happen next there are, at present, two possibilities. It will receive a backing from a musician I trust or else - if he chooses not to work with it - I will get it mastered as an acoustic only track and put it out there - somehow and somewhere.

As soon as I know more about its fate I will post it here.
Posted by SKC at 02:07