THE SAP SIMPERS ON

Yesterday I received an email containing an invitation to submit to a competition. One of the categories was for poetry. Now I do not enter competitions* and I do not think I write poems but I do write words that can look like them. And as I was hanging around not sure what to do next I decided to submit one of the things I had.  I came across SO SAID THE SAP and decided to use it. Doing so also reminded me where I had got the title for the blog and what it had meant at the time.

I also listened to the recording of the words on Bandcamp and if anyone is interested they can be heard on there by using the following link https://sheilakcameron.bandcamp.com/album/so-said-the-sap

I have moved the selection of spoken words to which they belong (there are 30 items) to first place on the Bandcamp page for easy access. The image - a collage - which goes with it can be viewed there. It was also included in another post on this site but (again for ease of access) I may as will include it at the foot of this one

To hesitating
Stepping back
Scared of falling
Off the track

A peace of mind 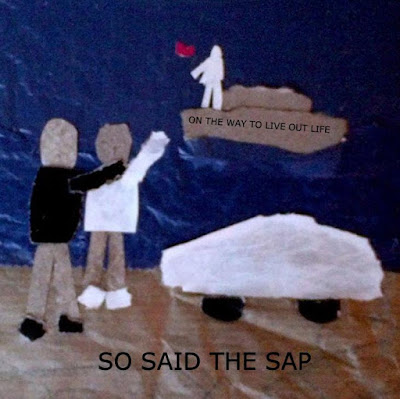 *A correction. I did inadvertently (one of my favourite words) enter TWO INCHES TALL in the Spoken Word category of the Independent Music Awards and it was - remarkably - successful. But that was a long time ago in 2012
Posted by SKC at 03:15