The remastered version of HELLO SINGING BIRD is now on Bandcamp at https://sheilakcameron.bandcamp.com/track/hello-singing-bird-2

It is accompanied by a photograph of a thrush which once sang in a Glasgow garden. It could be the same thrush as the very tame one which can be seen eating raisins, on most days, in the same location. I am told the image looks rather 'murky' and will be attempting to improve it if at all possible.

And it has been. 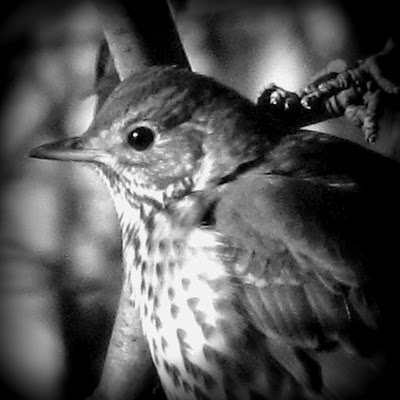 About the song. I don't know exactly why I have recently been working on songs associated with the loss of a mother but two on Bandcamp, DANCE ON and MOTHERLESS, precede this one.

Hello Singing Bird was written while - as it suggests in the words - walking through a park. The park was Glasgow Green. The song also refers, as indicated in another post on the site, to a loaf of Mother's Pride - and for anyone who likes Dusty Springfield, to a video of her in an advert about the bread. I will repeat it here