Two days after posting WALTER- AND THE WREN AGAIN, a plate, recently forgotten about, is noticed on a shelf alongside some books
For several years it has been carefully stored in a cupboard but last year it was brought out and used as a container for an assortment of horse chestnuts - some in their cases, some having pushed their way out  - like conkers being born

And from some of the text around the rim I was reminded, although I was not altogether certain, that the plate was about the wren

But what were all the words and what, if anything was underneath them
And before removing the chestnuts to find out I took a photograph 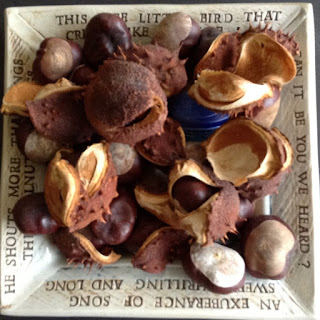 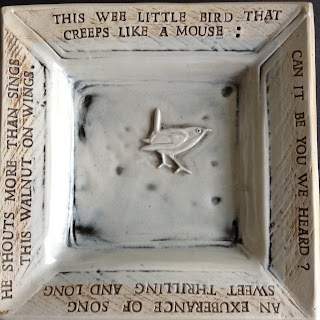 And having got this far I need, for my own reasons, to say that, as far as I am aware, I was not on the look out for more about wrens - for more anything about wrens - although I am open to thinking that information about wrens might have been looking for me

The track LOWLANDS AWAY is not at all polished It has been mastered but not arranged and leaving aside my rather low key performance it is a beautiful song It can be heard on Bandcamp at
https://sheilakcameron.bandcamp.com/track/lowlands-away

The plate was made by John and Jennifer Davies: Potters of Tlell Haida Gwaii

Information on conkers and horse chestnuts can be accessed using the links below
https://en.wikipedia.org/wiki/Conkers

https://en.wikipedia.org/wiki/Aesculus_hippocastanum
Posted by SKC at 20:37