I will be using this post to declare that the song GO ON THEN, with an additional arrangement by WILD BISCUIT MUSIC, was uploaded to Bandcamp earlier today at https://sheilakcameron.bandcamp.com/track/go-on-then-2

And now to say some more about THE BISCUITS

For me, in my efforts to get some of my material out there in a state that would make it worth listening to, they have been not only generous but immensely effective!

It is the last track on the album MORE LIKE A RIVER THAN A ROAD (which also has six other tracks arranged by them) And they can all be heard on Bandcamp The link is https://sheilakcameron.bandcamp.com/album/more-like-a-river-than-a-road-seven-songs-from-glasgow-and-haida-gwaii


For those who would like to know more about THE BISCUITS, John and Mags, I would recommend a visit to their web site at www.wildbiscuit.com  There is much more that could be said but it is probably best that I leave them to say it The text below is taken from their site

Wild Biscuit is a production company, music label and hot-house of ideas for the creative industries. We are based in Argyll on the west coast of Scotland, an area steeped in Celtic resonance yet only a short hop from the urban chic of Glasgow. Collaboration is our principle value, and we specialize in the unexpected.

Wild Biscuit people are
John Saich (guitarist, sound designer, producer). John was eleven years bass player and song writer with Scots Gaelic pioneers Capercaillie from 1987, appearing on eight albums (including Secret People, recorded by Blue Nile co-producer Calum Malcolm) and the band’s Top 40 single Coisich a Ruin. John has written and recorded music for television on BBC Scotland and Discovery, and worked as a musical director at Ullapool High School and as a tutor at the National Centre of Excellence in Traditional Music.

Mags Russell (composer, choreographer, photographer and producer). Mags has worked in both the commercial and voluntary sectors, and was producer, team leader and designer for MOVE, Wild Biscuit’s most successful cross-artform project. She was co-writer on the The Distance album and Stay Home EP (sharing lead vocal credits on the first and taking solo on the latter)


About the song GO ON THEN: it has been transformed by John and Mags from an acoustic only track into a 'proper' one 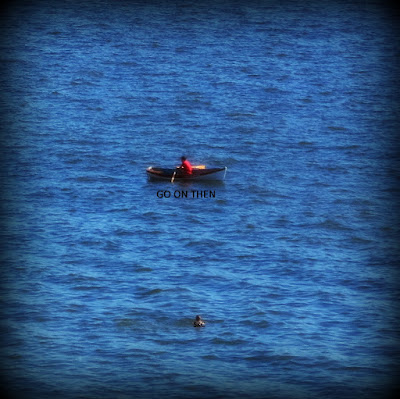