This idea is taking shape as I write

The option of presenting in a pdf file a complete list of the material (which in one form or another and on one site or another is out there) is being abandoned! 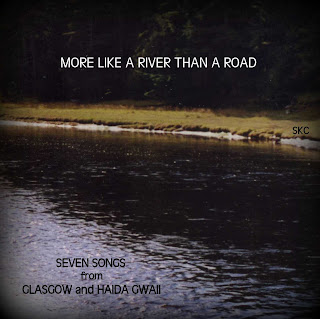 Anyone who knows anything of the songs I have written will be aware of Wild Biscuit Music www.wildbiscuit.com and how important they have been And so it will not be surprising to see that they were heavily involved in the first significant chunk of released material Also, as further chunks are posted on this site their involvement throughout this phase of my life - and work - will be evident

A seventh song (see below) also arranged by Wild Biscuit, was combined with these two EPs

At a later date, the seven songs were re-ordered to become the album MORE LIKE A RIVER THAN A

This album provides a good demonstration of how the wish to get songs out there took precedence over other considerations I.e. I couldn't wait until there were enough tracks for a complete EP  And as the songs were not worked on as a group the process which led to them becoming a complete album happened over a period of several months

And after making that comment I have decided to use the image on this post It will also re-affirm for me the importance of that special place in my life, between the river and the sea and beside the brown river rising